The wealthy already bear far more of the burden in the U.S. than they do in other developed countries.

President Biden’s effort to pass the largest tax increase in U.S. history is based on the verifiably false claim that Americans with high incomes don’t pay their “fair share.” In no other country do the rich bear a greater share of the income-tax burden than they do in the U.S. 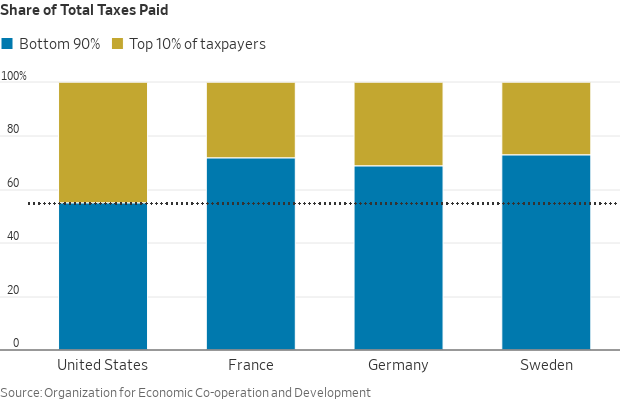 The Joint Committee on Taxation and the Congressional Budget Office found that the 2017 tax cuts made the American tax system more progressive and, according to the CBO, the “highest quintile’s share of federal taxes was 0.5 percentage points higher in 2018 than in 2017.”

Why a lower rate for the top 400 filers? Because they make use of the same types of tax-advantaged investments that the Democrats are now trying to expand massively in their Build Back Better tax bill. They donate large amounts to charity and lower their effective tax rates by responding to government tax incentives. They buy tax-exempt municipal bonds and invest in things like solar and wind energy and low-income housing. Odd that they are then accused of not paying their fair share.

In a classic bait-and-switch, Mr. Biden and the Democrats are demanding that taxes be raised not only on the 400 filers earning more than $400 million a year, but on families earning $400,000. These families aren’t rich enough to use tax-advantaged investments effectively, and they are already paying a higher share of the income-tax burden relative to their income than any other taxpayers on earth.

The Democrats’ tax-the-rich ruse is further evident in their pledge to remove the cap on the state and local tax deduction, or SALT. Restoring the SALT deduction would provide tax cuts for very high earners in high-taxing blue states—again, many of the same people that Democrats claim don’t pay their fair share.

Had the Democrats’ objective been to assure that sophisticated high-income filers would always have to pay a minimum amount of taxes, they would have overturned the dramatic reduction in the Alternative Minimum Tax provisions contained in the 2017 tax cuts. The AMT reductions cost the government more than $637 billion over a decade—more than a third of the total cost of the 2017 tax cuts. Why would the Democrats leave those tax cuts in place, unless their tax-the-rich demand is simply a ruse to raise taxes on upper-middle-income families?

The Democrats can get away with pretending that raising corporate taxes represents a tax on the rich only because people don’t understand that corporations don’t ultimately pay taxes. If there is anything economists agree on—and there isn’t much—it’s that all taxes imposed on corporations fall in part on the consumers of their products and in part on their stockholders and workers. Workers pay between 50% and 70% of the corporate tax that isn’t passed on to consumers in higher prices. The record growth in real wages after the 2017 corporate tax cuts, especially among low-income, minority and disadvantaged workers, bears this out.

So when corporate tax rates are raised, it’s workers and their pensions, retirement accounts and insurance investments, which own 72% of America’s stockholder equity, who pay most of those taxes. Not surprisingly, with much of the 2017 tax cuts made up of corporate rate reductions, child tax credits and a doubling of the standard deduction, the Trump tax cuts made the tax code more, not less, progressive.

Since the War on Poverty started in 1965, the labor-force participation rate of bottom-quintile earners, who now receive more than 90% of their $50,000 average income from government transfer payments, has fallen from almost 70% to 36%. With the Build Back Better Act proposing to explode unearned benefits and shower them on middle-income Americans, how long will it take for the current U.S. labor-force participation rate of 61.6% to fall to 55%, as it is in France, or 50%, as it is in Italy? Who then will pull the wagon and pay the taxes to fund the American welfare state?

For a while the Democrats can simply deem more Americans rich and raise their taxes. Eventually an American welfare state will require European welfare state taxes—such as a 20% sales tax paid by everyone.

Mr. Gramm is a former chairman of the Senate Banking Committee and a visiting scholar at American Enterprise Institute. Mr. Solon is a partner of US Policy Metrics. John Early contributed to this article.